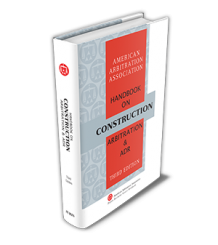 The Handbook begins with chapters on specific strategies and tools to help manage risks and avoid disputes in the construction field. It discusses ADR as it relates to subcontracting and labor disputes, the use of a neutral architect, the importance of site visits, and the significance of understanding ADR procedures before agreeing to them. The option of using mediation to resolve disputes is explored, including guidelines and tools for successful mediation, the expert’s role in construction mediation, and what works and what doesn’t work in construction disputes.

The use of arbitration is also looked at in depth and guidance is provided for both the arbitrator and for the advocate. There is an entire section devoted to partnering (the creation of a working relationship between a building owner and a contractor which further involves subcontractors, design professionals, and other agencies), discussing its benefits and providing useful tips. Lastly, advice is provided for both small and complex construction claims, and the use of Dispute Review Boards (comprising panels of three technically qualified neutral individuals).

Assembled from Dispute Resolution Journal - the flagship publication of the American Arbitration Association - the chapters in the Handbook have all, where necessary, been revised and updated prior to publication in the current Third Edition.. The book is succinct, comprehensive and a practical introduction and reference to the use of arbitration and ADR in the Construction field, written by leading practitioners and scholars.

The chapters were selected from an extensive body of writings and, in the main, represent world-class assessments of arbitration and ADR practice. All the major facets of the field are addressed and provide the reader with comprehensive and accurate information, lucid evaluations, and an indication of future developments. They not only acquaint, but also ground the reader in the field.