Lessons from our Virtual Year: Will Changes Caused by the Pandemic Endure?

The Leading Arbitrators' Symposium on the Conduct of International Arbitration, an annual highlight of Vis International Commercial Arbitration Moot week in Vienna since 2005, "went digital", and was hosted by JURIS Conferences on Zoom.

The conference recording is available for $75.00.  Purchase of the recording includes a complimetary digital version of the Leading Arbitrators' Guide to International Arbitration - Third Edition.

In the past year, international arbitration has moved online, requiring counsel and arbitrators to master new methods of conducting procedural conferences, oral arguments, evidentiary hearings, and deliberations.  This session will consider whether these changes should and will endure as the effects of the pandemic abate and travel resumes.  Will counsel and arbitrators be more available if proceedings are conducted online?  Will clients realize cost savings?  Do online proceedings encourage or limit opportunities to increase more diverse panels and new entrants?  Finally, panelists will discuss regional, cultural, and enforcement concerns, including uncertainty in some parts of the world regarding the enforceability of awards rendered after virtual hearings held despite party objection.

This Zoom conference, chaired by Grant Hanessian (Hanessian ADR, LLC, New York) and hosted on March 29, 2021, featured a discussion among the following panelists:

To purchase access to the conference recording, add the item below to your cart and proceed through check-out.  Once you have completed your purchase, you will receive a download link for your digital copy of the Leading Arbitrators' Guide to International Arbitration, and a seperate e-mail confirming access details for the conference recording.  If you have any questions, please contact marketing@jurispub.com.

Continuing Legal Education: NYS CLE credit is not made available to those viewing the conference recording after the live webinar. 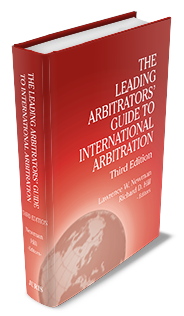 The contributors offer insights and advice on the way in which international arbitrations are carried out from the point of view of arbitrators reading pleadings and memorials and listening to witnesses and hearing arguments. The authors' discussions are intended to be thoughtful, insightful and useful - and perhaps, occasionally, iconoclastic. As a result, there may be instances in which the authors disagree with one another on certain points. This is to be expected for there are often many routes that can be taken to achieve a result.

Click Here to review the table of contents, read author bios and testimonials.

Grant Hanessian is an independent arbitrator in New York and Adjunct Professor of Law at Fordham University School of Law in New York.  He is former co-chair of Baker McKenzie’s global international arbitration practice, current U.S. member of the ICC International Court of Arbitration in Paris, immediate past chair of the Arbitration Committee of the U.S. Council for International Business (U.S. national committee of the ICC), and author or editor of several books on international arbitration subjects, including ICDR Awards and Commentaries.  Mr. Hanessian has more than 30 years of experience as arbitrator and counsel in disputes concerning investment treaty, energy, construction, commodities, financial services, insurance, intellectual property and other matters before virtually all of the world’s major arbitration institutions.

Janet Walker is an independent arbitrator with chambers at Toronto Arbitration Chambers, Int- Arb Arbitrators in London, and Sydney Arbitration Chambers. She has served in commercial and treaty investment arbitrations as sole, presiding, and co-arbitrator in ICC, ICDR, DIAC, HKIAC, PCA, SIAC administered, and in ad hoc arbitrations in a variety of seats. Her matters have covered a range of industries including construction, heavy equipment, M&A, shareholder, distribution, intellectual property, environmental, finance and employment. Janet is the Chair of ICC Canada and a member of Toronto Commercial Arbitration Society (formerly Arbitration Roundtable of Toronto) and of the CIArb Canada Board. Janet is professor of law and past associate dean of Osgoode Hall Law School, York University.

Ina C. Popova is a partner in the Debevoise & Plimpton’s International Dispute Resolution Group, and her practice focuses on international arbitration, international litigation and public international law. Ina is recognized within the legal community as one of the top international lawyers of her generation.  She sits as arbitrator and serves as counsel in a broad range of international matters and has particular experience in the energy, mining, and technology, media and telecommunications sectors.  Ina has represented individuals, corporations and states in a broad range of disputes under the rules of all of the major arbitral institutions, as well as several regional institutions. She also advises parties in international litigations involving proceedings in foreign and domestic courts and has represented parties before the federal and state courts in the United States, including the United States Supreme Court. Ina has taught law at the Institut d’Études Politiques de Paris (Sciences Po) and is a Fellow of the Société de Législation Comparée.

Nathalie Voser is a founding partner with rothorn legal, a law firm set up in 2020 that focuses on dispute resolution and has offices in Frankfurt and Zurich. She acted as counsel and arbitrator in a large number of cases under various arbitration rules. Her practice focuses both on commercial and investor-state disputes relating to contracts in the field of construction, civil engineering and energy projects, oil and gas, research and development, and distribution and licence agreements. She also has substantial experience in the pharmaceutical and automotive industries. She is a professor at the University of Basel, where she teaches international arbitration and contract law, and currently sits on the board of several arbitration institutions. Finally, she is the co-author of a standard and well-known arbitration textbook which will appear in its 4thedition in spring 2021.

Todd Wetmore is a partner in the Paris office of Three Crowns. With over 25 years of experience, Todd has handled some of the most challenging and complex commercial cases, appearing as counsel or arbitrator in over 50 major international arbitrations.  He is a recognized specialist in infrastructure and construction disputes, and regularly acts as counsel and arbitrator in commercial disputes in the energy, technology, manufacturing, mining, and commodities sectors.  His recent experience includes disputes relating to foreign military sales, upstream oil and gas pricing and production agreements, automobile distribution, pharmaceutical development agreements, as well as joint venture and post-M&A disputes.  Todd’s vast experience as an arbitrator includes appointments under the ICC, UNCITRAL, LCIA, and Swiss Rules.  Todd is a Vice-President of the ICC Court and is qualified in England, France, and Canada.

Eduardo Zuleta is a founding partner of Zuleta Abogados Asociados (Bogotá).  Eduardo focuses his practice on national and international arbitration, international litigation, public international law, and private international law.  He has participated in more than 40 arbitration proceedings, acting as arbitrator and counsel, and has been appointed as president, co-arbitrator, sole arbitrator, and selected as counsel in international commercial arbitrations under the ICC, UNCITRAL, ICSID, and ICDR rules in matters involving public and private companies.  His experience includes disputes relating to construction contracts, oil and gas, infrastructure, public services, distribution, contracts for decontamination, commercial contracts, and project financing.  He is vice president of the International Court of Arbitration of the ICC and member of the Arbitration and Conciliation Center of the Chamber of Commerce of Bogotá, as well as several arbitration centers in America, Europe, and Asia. He was appointed by the Government of Colombia to the ICSID list of arbitrators.

Juris Conferences is a leading organization developed to promote discourse among figures in international arbitration and dispute resolution. To date, we have presented over 100 conferences. Our goal is to give interested legal practitioners an entrée into these fora. As a division of JurisNet, LLC, the leading legal publisher of materials on arbitration and dispute resolution, Juris Conferences is in a prime position to provide the most accurate and relevant information to those practicing in the areas of arbitration and ADR.

If you have any questions about the