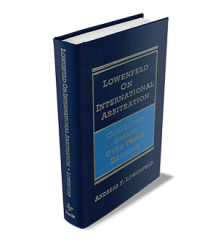 In fifteen essays collected in this volume, Professor Lowenfeld brings together world class scholarship in all aspects of international economic transactions with more than thirty years experience as an arbitrator in international controversies. The essays range from a primer on international arbitration for those who are new to the field or entered it without adequate introduction, to sophisticated analysis of the role of party-nominated arbitrators and of the blending of civil law and common law traditions into what Lowenfeld refers as the “omelette” that international arbitration has become. He discusses the use of lex mercatoria, the pros and cons of judicial review of arbitral awards, and the adaptation of arbitration to controversies involving public law and public policy. Lowenfeld’s illuminating anecdotes and lucid writing style will provide pleasure and insight for all who are engaged in international arbitration – whether as counsel, as arbitrators, or as academics.