Czech and Central European Yearbook of Arbitration - 2012: Party Autonomy versus Autonomy of Arbitrators 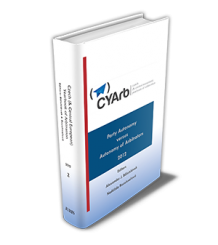 Following the first volume of the Czech (& Central European) Yearbook of Arbitration (CYArb), the second volume of CYArb thematically concurs that the points of friction between arbitration, as an alternative dispute resolution mechanism are the freedom parties have in setting up the methods and mechanisms for the dispute settlement, and the state organized court proceedings with its obligatory jurisdiction and strict rules. The state organized court proceedings guarantee the firm borders and equality of means regarding the protection of the fundamental rights of the parties during the proceedings.

The primary focus of CYArb is the issue of autonomy throughout the arbitration process. The principle of autonomy represents the backbone of arbitration as the ADR mechanism. It provides to the parties the necessary freedom to stipulate the adequate method for the solution of the dispute. On the other hand, the autonomous approach of the parties creates an informal relationship among the subjects involved in dispute resolution. The informality provides room for the autonomy of the arbitrators or that of the arbitral tribunal, be it in ad hoc or institutional proceedings on how to advance the dispute. The CYArb project aims to highlight the (potential) pitfalls of each of the categories of the autonomous parties present during the various types of arbitral proceedings in order to analyze the role of autonomy as a leading principle in the ADR mechanisms in its mutual interaction. The topic therefore provides a wide spectrum of interesting issues to be addressed from the practice and academic points of view, particularly with regard to the comparison of the specific national and international approaches of the permanent arbitral courts.

The project concept and editors are drawn from Czech Yearbook of International Law – CYIL. The ideological similarity between CYIL and CYArb is primarily reflected in its concept. The third volume of CYIL is in preparation and will be published by JURIS.

The CYArb annual volume will be published exclusively in English with abstracts of the articles provided in Czech/Slovak, French, German, Polish, Russian and Spanish. The website dedicated to the project, www.czechyearbook.org is operational in a total of 16 languages.

A vital part of the project is the cooperation with leading figures and institutes in the field.

In the Czech Republic, endeavor has the cooperation of the particular departments of the following institutions:

Bernd Ehle
Effective Use of Demonstrative Exhibits in International Arbitration

Martin Maisner
Liability and Independence of the Arbitrator

Section A
Current Case Law of the National Courts regarding Arbitration

Section B
Case Law of the Arbitral Tribunals

Selected Bibliography of Czech and Slovak Authors for 2011

Bernd Ehle
Effective Use of Demonstrative Exhibits in International Arbitration

Martin Maisner
Liability and Independence of the Arbitrator

Section A
Current Case Law of the National Courts regarding Arbitration

Section B
Case Law of the Arbitral Tribunals

Selected Bibliography of Czech and Slovak Authors for 2011